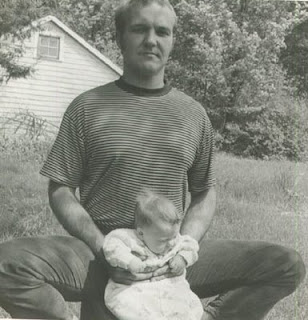 My oldest was born in the summer of ’65. We were living in a basement apartment in Allston, outside Boston. I had hand-me-down pregnancy clothes from Aunt Judy, the 50’s kind, with floppy tops and belly cut outs. My mother-in-law helped too, whipping up shifts on her Singer. Those were the days! I didn’t go to a doctor until 6 months in, and what we could afford was the Boston Lying-in clinic. I rode there on the bus every few weeks, answered questions that were part of a long-term survey, and saw a group of young doctors and nurses—a different set every of time.

It was the hottest spring in 90 years, super oppressive for this country girl. It was also the spring of the Boston Strangler, and a pregnant 19 year old in the basement apartment alone in a strange city felt pretty anxious sometimes. My husband worked at a bank running an IBM 1401 mini-computer, one of those new gizmos that were being bought by businesses everywhere. We were both hoping to return to college in the fall, but didn’t actually have a clue about how.

For the day I went into labor, we put aside taxi fare. I packed a bag. However, as the due date approached my hands, feet, legs and face swelled, and my B.P. soared. The clinic staff said this was “toxemia,” which I looked up in my bible, Dr. Guttmacher’s "Pregnancy & Childbirth." Two days later, I collected my suitcase, caught the bus and rode to the hospital. The whole thing seemed, after all those movies with hysteria, hot water and ripping petticoats, an anti-climax.

They never gave me the drug, though, as I obligingly went into labor after the embarrassing prep that was de rigeur for OB in those days. Husbands were not welcome, either, so mine stayed at work. Natural Childbirth – I might have been poor and young, but I was not uneducated – “Only works for European women, who are so much stronger than American women.” (I’m quoting the supervising Obstetrician I’d asked.) Because this was my first, the staff pretty much ignored me until a nurse noticed the top of my son’s head. Hospital rules required anesthesia, in this case a saddle block, but it was given so late it didn’t take until well after he was born.

Baby arrived to thrill a room full of neophyte students. He was seriously pissed off about the rude ejection. Quickly, though, he stopped crying, and began to gaze around wide-eyed with a “Where the HELL Am I NOW?!” look on his face.

A stout, gray nurse approached with a needle, but I had the La Leche League handbook memorized.

“Just to dry up your milk, Honey.”

“You’ll be sorry!” Her lips set in a grim line. She checked the chart, too, even argued a little with the resident, before she went away.

Later, I talked to my husband on a phone at the nurses’ station. Visiting hours were over. He would be allowed to see us tomorrow afternoon.

The family survived all this long ago hospital rigamarole. My son grew up, got married, and had a lovely daughter of his own who is now in college.

This all happened a very long time ago, but when his birthday rolls around every year, I still think about it. I guess that's a Mom Thing.
Posted by Juliet Waldron at 6:52 AM No comments: