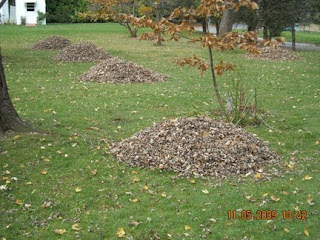 The Iroquois have an inspiring “Salutation to the Natural World” which I’d like to paraphrase and share as my contribution to this year's Thanksgiving
celebration.
Their prayer begins: “We have been given the duty to live in balance and harmony with each other and all living things. So now, we bring our minds together as one as we give greetings thanks…”

First, they send “greetings and thanks” to the Earth Mother, for “she continues to care for us as she has from the beginning of time.” Second, they thank the waters of the world, for “water is life.”

Third, they turn their minds to the Fish in the water, who, they believed purified the water, and who gave themselves to the Iroquois as food.

Fourth, they thanked the plants, which “work wonders,” sustaining all life. They especially thanked the food plants, the grains, vegetables, beans, berries and roots which “help the People survive.” They thanked the Medicine Herbs, who are “waiting and ready to heal us.” They thanked the trees, who gave food, shade and shelter to men and to animals alike.

They thanked the animals, who were their teachers, and who gave their bodies as food. They thanked the birds. With their “beautiful songs…each day they remind us to enjoy and appreciate our life.”

Then they thanked elemental Nature. They thanked the Four Winds, which “bring messages and strength,” and the “Thunder Beings,” ancestors, who brought water and kept demons” in hiding. They praised the Sun as “Elder Brother,” “the source of all fires of life.” They thanked Grandmother Moon, “the leader of all women,” and the stars who guide hunters and warriors who travel at night.

Finally, they thanked the “enlightened teachers” who have come to earth throughout all ages. “If we forget how to live in harmony, they remind us of the way we were instructed to live…”

Last of all, they thanked The Great Spirit, sending “greetings and thanks for all these gifts of creation.”

The Iroquois believed that all we need to live a good life is here on Earth. Sometimes in our modern, frazzled lives of getting and spending, of racing here and there, of competition and “keeping up with the Jones,” it’s therapeutic simply to pause, to look around us and remember to give thanks as they did, for the natural wonder of the world which sustains and surrounds us.
Posted by Juliet Waldron at 11:29 AM No comments: