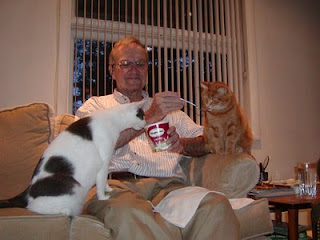 Cat Names and how they get them is a long and tortuous topic, as twisted and lumpy as old street cat’s busted tail. The “owner” (or, more properly, the feline “host”) gives kitty a name, but as Paul Gallico told us long ago in his wonderful and heartbreaking story, The Abandoned, kitties arrive with their own names, secret names that only cats know.

It is my theory that the secret name leaks into the susceptible mind of the cat “owner” and causes a kind of sea change to occur. The original “given” name becomes something else, it transmutes, sometimes taking along the elements of the by-human-bestowed name, sometimes not. I gave the name “Pamina” to a small flame-point domestic shorthair barn-born kitten, during my extended period of Mozart Madness. This promptly morphed into “Mina,” which became in turn became “Meena,” “Meena-Moo,” and finally just “Moo.” At the same time, we had another barn baby who made a perfect imitation of a Maine Coon, old-fashioned black and gray. As if Mozart wasn’t sufficiently entertaining, I was also reading a lot of ETA Hoffmann, one of the 18th Century inventors of the Fantasy novel. This darling round kitten became “Murr,” after Hoffmann’s own beloved feline companion. (It means “purr” in German.)
Typical of human skill in naming, this large cuddly ball with toe feathers and a fluffy buff belly, did not purr at all. He had that gorgeous round Maine Coon face, with neck ruff and ear feathers, so he became “Murr Face.” After awhile—and you can see this coming—it just became “Face,” or, when we wished to address him formally: “Face Cat.”

I’m not saying there is anything wrong with “Mittens” or “Boots,” nor even “Fluffy,” although I think these cats, too, have secret names, ones their owners may never discover. I once read in a new age magazine that cats prefer names which have initial sounds of “S,” “T,” “F,” “B,” “M” and “P.” On the strength of this (perhaps) dubious authority, I followed the rule for many years in giving cat names. We had “Set” and “Tut” strictly following the Egyptian theme. We had Bast the Beautiful, a ferocious black female who chased squirrels up trees, caught them and then rode them down to their deaths. We had “Sam,” a Siamese, of course, but of the apple-headed big bodied variety. His full name was “Mahasamatman” after the Buddha.

Some nice folks in Nashville let us take over Sam’s care, as he’d moved over to our house anyway. Fact was, they’d picked him up behind a Mexican restaurant in Phoenix. He loved those dinners we had in the eighties: corn chips covered with chili and cheese. You could make Sam a plate starting with the chip, bean and burger layer, then top it with salsa, sour cream and guacamole, and he’d motor through it, right down to the bottom.

There’s an old adage about every life “Needs 9 cats.” You need at least nine, IMHO, because every cat is a stand-out individual. The older I get, and the more I learn about them, the better my feline relationships become. As the all-powerful aliens said on an ancient Star Trek “They are beings; they have spirit.”
–Juliet Waldron
http://www.mozartswife.com/
Posted by Juliet Waldron at 8:04 AM 9 comments: