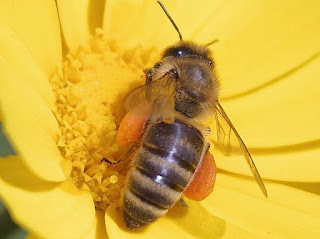 She changed it to "Debra" after she grew up. I guess there were just too many bad/sad associations with her original birth name. The birth certificate said, "Deborah Holiday." Her mother explained to me way back when I had just married into the family, that the five days she got in hospital after childbirth seemed like a holiday to her. The Waldrons already had two little boys, aged 8 and 4, and, at the time, her husband was away on business.

Debra was at times a difficult person to love. She was smart--although by the time I met her, as         a teen-ager, she'd been convinced by other people that she was dumb. She was pretty and talked tough, but she was insecure. She wasn't as interested in other people -- except theoretically -- as she was in herself, and this led to trouble, both for her and the many who loved her. She was brilliant in her chosen field, Kinestheology, and a trail-blazing pioneer in the field of massage therapy. She dared to study the subject and she dared to practice, too, back in the days when a lot of people thought "massage" meant "sex." She was always brave and always unconventional, a real amazon, a tall woman with long flowing hair and a handsome aquiline nose. In Victorian times, she would have been considered a beauty.

She was a leader in her chosen field. In one of the most despairing times of my life, she gave me a massage and a "realignment of aura." I had been at the end of my rope--the very end--and she took all the pain I'd been keeping in my body and took it away. I could get off that table and go on with my life because of what her hands had done. People talk about it, but she had it--the healing touch. She founded Still Point School of Massage in MA. Although the name and practice eventually became the property of others, schools of that name still teach the blessed work of hands.

Perhaps it was all the pain she took from the bodies of her patients which sickened her. Perhaps it was her genes, for, like her mother, she fell victim to MS and began the long, slow slide toward disintegration and death. It was a terrible irony for such a vital, strong-bodied person to fall prey to a wasting disease.

Deborah means "bee," and she was a Queen kind of bee. The ancient Hebrew goddess, Deborah--and before Yahweh took over the whole ball of wax, there were Hebrew goddesses--sat beneath a palm tree, dispensing justice. Debra loved to be stage center. She hoped to end her life in a room full of her friends, a sort of exit party. The police came to stop her, but they couldn't stop the progression of her illness and the onset of Death, for spinal stenosis was reaching her brain. Her body had long since ceased to serve her and Debra knew quite well that her mind would be lost next.

Thankfully, Hospice is allowed to help those who are frail and dying in pain. It was clear that Debra wanted to leave this place and begin her journey into Time. She told me she wanted to see her mother again, and trusted that she would, on the other side.

Debra still knew her own body, and she when her time within it was almost over. The good people of Hospice came to the rescue and she died peacefully on June 20, just before the Solstice. I trust she winged her way to the land of cosmic clover and nectar-filled flowers.

"Everything changes; nothing dies."  (The Blue Fox)

http://www.julietwaldron.com
See All my novels there...
Posted by Juliet Waldron at 8:36 AM 1 comment: 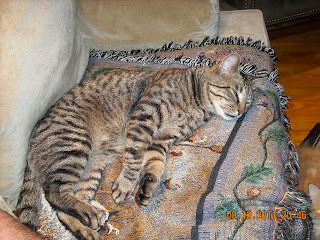 Returned from a 4 day road trip—3 of which were mostly road. The cats missed me, but particularly Bob, because he welcomed me home in his usual over-the-top Uber feline way. Hadn’t been in the house again for more than an hour, when I heard keening outside the door. It’s “Tigger’s” wurra-wurra-wurra, deep, and, somehow, both penetrating and nasal. Nasal of necessity, because he only makes this yeowly cry when he has some pitiful victim clamped between his jaws.  Yesterday, amid the blooming daffodils and the greening yard, the red buds getting ready to burst and send the human community into a coordinated allergy attack, was the last day for a poor bunny, probably  little more than a month old.


I foolishly opened the door and Bob rushed in carrying it, a tiger with head held high, proudly bearing prey. The sad little head and ears dangled on one side of his mouth, the adorable baby legs on the other. I ran to catch him and he dropped it at my feet. When I gathered it up in a napkin, it was still warm and floppy.


“Damn you, “ said I, which was not the response he was looking for, even though I didn’t really push the regret and sadness I felt into the words. After all, he’s not a kid, he’s a cat, and, in his feline way, he truly meant well. I placed the corpse back outside on the porch. Bob followed and lay down beside it. He stretched out, head up, like some Serengeti hunter relaxing with a fresh-caught antelope.
As I gave him a quick stroke, I realized that like the LOTR’s Gollem, he’d brought “master” a lovely present.  As Peter Jackson has it: “Eat them! Eat them, they are young and tender!”

Posted by Juliet Waldron at 8:29 AM No comments: