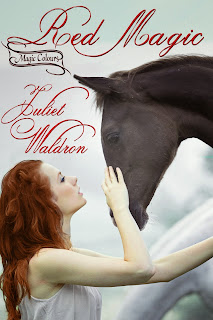 Caterina has been forced to marry her dead older sisters' rakish fiancé. Months later, the marriage remains unconsummated. When she intercepts a letter from one of his mistresses, she is first jealous and then alarmed, for she realizes that despite her resolve, she has fallen in love with him.

Cat thought she'd never be able to get to sleep.  Still, somehow or other, she wandered into that strange other realm.


There was Wili, sitting in the window seat at home.  Her sister, blonde braids demurely crowning her head, was deep in embroidery, a piece stretched on a frame.


Cat was horribly agitated.  She ran forward with the letter in her hand, the letter from Konstanze.  Wili gazed at her, a serene expression in place.


"Wili!  Read this," Cat cried.  "Does it mean what I think it does?"   With deft fingers her sister ran the needle into the cloth.  Then she took what Cat offered and read.  Her skin, always pale, was of an unearthly translucence.


After awhile Wili looked up and shook her golden head.  Firmly she handed the letter back.           "I don’t cry anymore," she said.  The soft gray eyes that Cat remembered so well were full of nothing but a profound, unruffled calm.  "It's for you to cry over him now," she said.
Coolly turning away, she retrieved the needle and resumed her handwork.


Someone had come inside the bed curtains, someone with gentle hands, someone whispering something she didn't understand.  Great arms picked her up and Cat's wet face came to rest upon a freshly laundered nightshirt, one that covered a massive shoulder.   "There, there," a male voice comforted.  "Wake up, little one.  Wake up."


"Christoph," she gasped, understanding at last.  She felt her muscles gather and flex.


"You were having a bad dream." The great arms, like oak, girded her.


To push against his chest was nothing but frustration.  She might, with as much effect, push one of the stone walls of the manor.  Sobs tore out of her.


Her husband continued to hold  her.  One hand soothed, while the other cradled her against him.  She sobbed, let the tears drench his nightshirt. He began to rock her.  Now and then his lips brushed her cheek, but it was so tender, as if he comforted a child.

Cat lay limp against him.  How easy it was to cry herself out against his strength, to feel the affectionate hand on her back, the one in her hair!  His chest moved against hers as his breath went in and out.  She could feel the pulse of his heart, an even drumbeat.
"Are you better now?" he asked after awhile.  He sounded supremely weary.


Cat sat still, trembling with all the warring emotion. A tall skinny figure appeared by the side of the bed, illuminated in the rippling light that came from the open door into his room.


"It's not necessary," Cat said, but she had to move back, because Elsa was already climbing in beside her.
"I think that it is," Christoph said firmly. He began a retreat towards his own room.  "Please stay, Elsa, no matter what."


"Thank you," he said.  "Good night, ladies," he added, carefully shutting the door behind him.  Now it was dark again.  Silently Cat lay back.  She felt exceedingly strange.


"Yes."  It was pitch black and Cat couldn't see a thing, but she knew that the long thin girl beside her was bursting with questions.


Suddenly, she ached to confide.  Maybe not everything, but something.      Finally she reached out, took Elsa's hand and whispered, "The Graf never takes me to his bed."


"I know," came the whispered reply.  "You are always so angry and so sad."


"It is because of your lady sister, is it not, Grafin?" came the surprisingly astute reply.
"Yes. "

Elsa's thin fingers pressed hers warmly, but Cat was grateful when the servant didn't speak again... 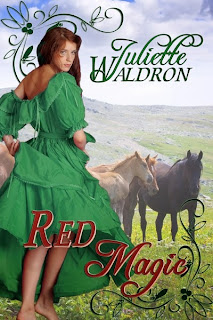 See all my historical novels at:


And, dear reader, if you've got a moment, hop on over to these other talented


Posted by Juliet Waldron at 7:45 AM No comments: