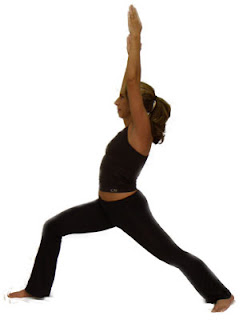 I dabbled in Yoga back in the 60’s. The first thing I learned was that I was “white-man-stiff”. A naturally bad back left me unable to touch my toes, even on my youngest, skinniest day. Even the simplest yoga posture was a tough proposition for me. As a kid, I’d always tried to “be strong” even when I wasn’t. I really pushed the poses. You can imagine what I felt like the day after.

I injured my lower back. I froze my neck. I couldn’t bend down to my toddler without collapsing in pain. Even my eyeballs throbbed. After that initial experience, you better believe I approached yoga practice with deep respect for my built in limitations. I even kept it up for a few years, slowly and carefully running through a few asanas every day. The most adventurous I got was a sunrise salutation or four. The emphasis in the book I followed was on stretching, focusing, centering, and, finally, relaxing, feeling the welcome tingle of blood flowing into stiff, starved places.

Imagine my surprise when I, now an elder who has been through a couple of large surgeries, thought I’d check into my gym’s yoga class. I found that Yoga has become, over it’s years in the West, a Type A sport. Misunderstanding of what it is now is my fault, for the class I attend is at a Gold’s Gym©. I’d joined one a few years back in order to mess with the machines so that the few moving parts I had left didn’t completely rust shut. At this kind of gym--what did I expect? The first yoga class I attended destroyed me in less than 30 minutes. I had to pick up my mat and hobble out the door in utter humiliation, while I could still be sure I could drive my car.

Limping around the house a day later, I came up with “Kick Your Ass Yoga.” Joke aside, I’m still going. I found the “second best” teacher in my gym, whose class is not so full, and who is closer to me in age. She’s not the least interested in her resident “cripple,” and in my baggy sweatpants and tee shirts I’m likely an embarrassment among all the flexible Lycra Ladies in proper yoga garb. Despite that, and with an increase in my daily ibuprofen intake, I go and follow her instruction as fully as the body Nature gave me is able to do.

It is a yogic saying that "you are only as old as your spine." I hate to think how old this makes me, but at least a little practice now is a holding action. Eventually, I think, I'll feel better for it.
Posted by Juliet Waldron at 6:56 AM No comments:

THE MOON AND I 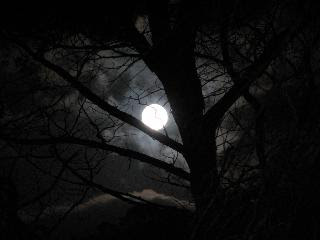 Moon/Tree/Clouds. These are the first things I remember. Crib slats casting black shadows on a summer smooth sheet. White face through spreading branches. Next, a perfect silver disc lending its sheen to arching branches. The sugar maple that grew behind Grandparents house was enormous.

(Perhaps it had been brought west to Ohio by a homesick Yankee.)

Of course, I knew nothing about it. All I knew was that the maple was good to see, the harmony of black and white, the leafy patterns,somehow created a sound in my head like a clear note.

I was secure. Outside the broad leaves with their sharpened edges barely moved against a velvet sky. Moon face gazed down serene; a cloud edged in rainbow and silver slipped past.

In the next room, women’s voices. They cared for me, two young, one old, getting ready for bed in the spacious bathroom on the other side of the door. It was big enough to accommodate one at the dressing table mirror, a bather in the claw foot tub, one at the sink running water--or, perhaps, even "enthroned." Indoor plumbing was the first improvement Grandpa made after purchasing his house. He had jokingly called the place “a girl’s dorm” for years, and now here I came, the newest female--the one quietly wondering in the room full of moonlight. Sleep was impossible bathed in silver, but it wasn’t frustrating or lonely. Body comfortable, I didn’t need to cry and call them to me. After all, the women were nearby--and so was the Moon.
Posted by Juliet Waldron at 12:15 PM No comments: