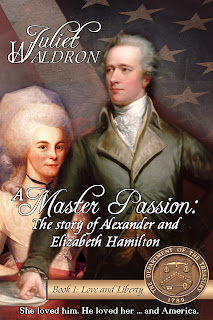 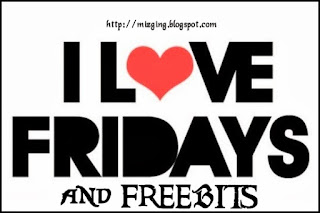 Betsy thought Alexander had been busy before, but since the new government of the United States had formed, it seemed as if weeks passed with little more than a peck on the cheek, or a body which crawled into their bed in the middle of the night and fell into an exhausted sleep.


Happily, Angelica arrived from England for a visit. Her arrival was like a whirlwind. She gathered Betsy beneath her wing and they sailed away from the preoccupied husband up the river to their father’s house. Mrs. Church’s children were stowed at schools in England, but Betsy’s brood came with their mother.


Their parents were delighted to see them and soon it was as if they were girls again. Betsy was relieved of child care. There were servants, doting grandparents, and two aunts young enough to be playmates for the little Hamiltons.


Angelica and Betsy slept together, as they’d done as children. Lying in late at night or early in the morning, they whispered to each other, confidences about husbands. Angelica hinted that in the fast society in which she’d been moving in France and England, she and John had both had lovers. Those tales of amorous hide-and-seek, of midnight entrances and hairbreadth escapes were incredibly wicked, but exciting, too.


Angelica spoke of a world Betsy could hardly imagine, tales of gambling parties with Dukes and Princes where fortunes were won and lost, of operas and night-long balls, of champagne theater parties and trips to the races. Her long-fingered hands, gesturing extravagantly, glittered with jewels. Her conversation was liberally larded with French.


Angelica had got what she’d always wanted, an escape from the dull Dutch Hudson, from the life of a “Provincial.” She had seen the French Court, had been presented to the Louis XVI and his queen, Marie Antoinette, at a formal levee. She and John had visited the famous Mr. Jefferson, now ambassador there, had dined and hunted with the Marquis de Lafayette and his wife.


In England, she’d dined and danced in company which often included “Prinny,” the Prince of Wales, the Duchess of Devonshire, and the highest society. Nevertheless, her old restlessness seemed undiminished. Somewhat to Betsy’s surprise, Angelica often spoke dismissively of her handsome husband and displayed a dissatisfaction which Betsy found hard to understand.


One morning while Angelica slept in, Mrs. Schuyler remarked to Betsy, “Our Angelica hasn’t changed a bit.”


“Yes, and why is that, Mama? She has everything she has always wanted—and more.”
“Unlike us, my dear, she was born restless. She will never change.”
http://www.amzn.com/B00V8UT910 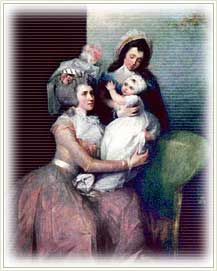 Posted by Juliet Waldron at 5:13 AM No comments: