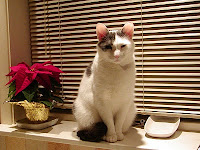 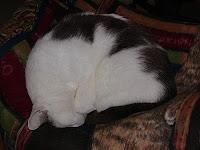 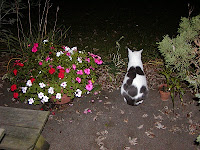 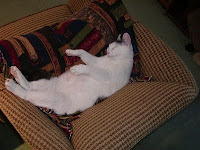 We lost a cat recently. He was one of the "legendary" one. Every lover of the domestic feline knows what I mean by "legendary." These are the cats who who have strong personalities and compelling backstories--rather like the best kind of character.

Cat owners usually have at least a pair of the furry dominators in residence, and this is because "You can't have just one" is as true of cats as it is of potato chips. The standouts aren't common. You may only host two or three of these in a lifetime of pet parenthood. It isn't just that these special cats are sociable, interested in the doings of their owners and in keeping them company. These cats possess an elusive, almost mythical aura.

Schuyler came off the hard streets of an adjacent semi-dead steel town. He was about two years old when we found him at that Humane Society, with a tail broken in two places and a bad hip. He called to us, then reached through the cage bars to hook my sleeve. It didn't take my husband and I long to realize he was the one. We learned that he had been dropped off by some people who couldn't keep him, but thought well enough of him to try this last resort method of finding him a home. I was in a Revolutionary War writing period, and already had a "Hamilton," so he was named another favorite character: "Major General Philip Schuyler."

When we got him, he was skinny and roman-nosed. He would always favor one back leg, but when our Vet first checked him out, she said he was basically healthy. "Just feed him up, and he'll be fine," she said.

There were three other cats here when he came, but he quickly promoted himself to what the German's call "Furst" a/k/a Top Cat. I don't remember much fighting, but his long Tom-Cat-hood and streetfighting experience probably gave him the ability to psych out his new mates. Schuyler quickly became my husband's favorite. He spent most of his fourteen years at our house either in Chris' lap or curled up beside him. He greeted Chris when he came home from work, and said good-bye, too, every morning. He stayed with his human tirelessly while my husband endured a slow recovery from cancer surgery.

He was a pretty cat, the kind you'd expect to see in a Flemish painting, curled on a bench in a black-and-white tiled kitchen scene. He had pink paws and a pink nose and shell pink ears. One of my online friends, seeing his picture, observed that he had "TES." I had never heard of TES, but she explained that her cat also had this condition. She said it meant "translucent ear syndrome."

Sky was a hunter, as you'd expect from an ex-stray, and merciless to mousies and voles. Many mornings we found them laid as offerings on our front steps. He had a musical purr. He also had a great fondness for doughnuts. We quickly learned that we had to hide these inside the cupboard, because if we simply laid them on the counter, they'd be on the floor in the next second, the bag torn open, the contents spilled and hastily gobbled. So much for the notion that cats don't enjoy sugar!


Sadly, he's with his mates now, out in our pet necropolis. This autumn, I'll plant daffodils on his grave. RIP Schuyler, who had every reason in the world to dislike humans, but who, through his innately generous nature, always gave us the benefit of the doubt.
Posted by Juliet Waldron at 2:21 PM No comments: