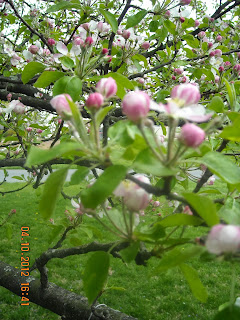 Every August, I wait and watch for the new crop of apples. I begin the process of filling my fridge with apples, and proceed to bake apple pies and apple bread. Then I fill my freezer with applesauce. The habit began early. 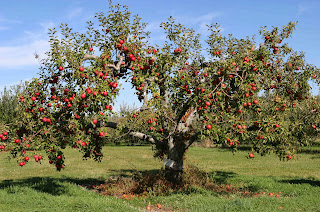 My parents had three acres in Skaneateles, NY which came with the remains of an orchard. There were seven trees in a row on the eastern side of the house, and I remember the shape and habit of each one well, blooming in spring or illuminated by sunrise. Nearest the road was a classic Golden Delicious tree with low, spreading limbs. It was my particular haunt, because it was easy to climb into. During hot summer afternoons, there were almost-comfortable notches you could get into with a book, but actually, the best thing was just to zone out and watch the ever-changing shadows of the leaves dancing across my skinny arms.   Besides this shapely tree there was also a Schuyler Plum, a Bartlett pear, and a single apple tree each of Rome and Cortland. We had one mystery tree which shed rock hard golden-with-pink-blush fruit very late in the season. To this last, my parents could not give a name until they consulted the local old-timers. This, we finally learned, was a Winter Banana. Although initially “hard enough to shoot through an oak plank”, we found that if you wiped these apples and stored them in a cool place inside a big cardboard box, by early January they would become tasty, juicy and delicious. These heritage apples kept so well, that we often made pies or sauce or even Waldorf salad as late as April. We rarely bought store apples. 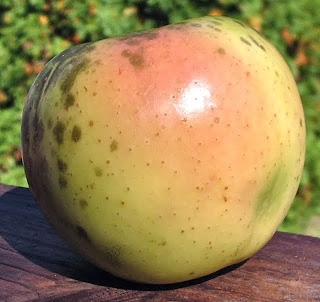 When my husband and I were first married, we lived in Massachusetts and so had plenty of excellent northern apples to eat, and so my craving—after dearth years in the West Indies--was satisfied. The newly developed, sweet and crispy Macoun, glowing in those picture-perfect Massachusetts orchards was a revelation. For work, though, we had to move south. The apples here came earlier, and what I found were of poor quality. At the farm stands, the Macs, Romes and Cortlands, and even the ordinarily good keepers such as Staymen, all too soon in the long southern autumns, became mush.  Friends who lived up north sent me fruit by post, but I was an apple exile--deprived.

Moving again, into Pennsylvania, I hoped to find better apples, but at first, I couldn’t locate them. People here liked Lodi, for they come early, but about all they are good for is a mild, soupy sauce. No, the early greens are not favorites—and don’t even mention the awful saw-dust-look-but-don't eat supermarket Red “Delicious”!  The antique varieties our grandparents knew had been destroyed by subdivisions and marketing. I’ve lived in PA for 30 years now, and that once world-famous Pennsylvania export, the York Imperial--of "Treasure Island" fame--has never crossed my seeker’s path.
Happily, we are returning to a time in which people crave good taste again, and at the renascent farmer’s markets I'm again finding the old favorites.  It’s catch as catch can, depending on weather, rain and whether I find them fresh off the tree. There are some new, tasty varieties—the Ginger Gold, the Braeburn, the Gala, and the magnificent, late season Goldrush.  Among the newbies, I confess to a weakness for Empires and Jonagolds. The older breeds, however, to my old taste buds, will always be tops. My heart leaps when I find a hard, tart Jonathan or a traditional Winesap, or even a Cortland or a Rome, fresh from a good tree. This year, during my  annual apple hunt, I encountered my Holy Grail of heritage apples—Northern Spy—and enjoyed a brief time of rejoicing in each crispy, crunchy, tangy bite. 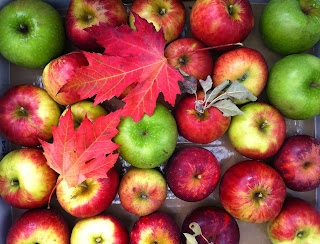