Doctor Strange -- and me 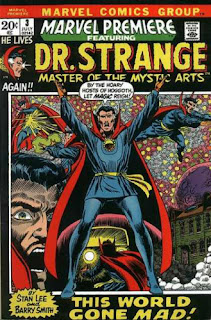 A headline that remains topical

I wasn't allowed to read comics when I was a kid. I could read the newspaper funny pages, where I predictably followed "Prince Valiant." And because these were parental favorites, I also read "Pogo" and "Lil Abner."

When I was sent to camp for most of several summers (scorched-earth divorce in the works at home), I met NYC kids who refused to leave the bunkhouse and just lay around and read the zillions of comics--DC, mostly--that they'd brought in boxes from home.  I've always wondered why, if their parents sent them to camp to get some sunlight and air, they allowed for the transport of all those comics. Maybe they only wanted the kids to read this stuff elsewhere. Anyway, no one could forbid my reading here, so, among this motherlode of graphic fiction,*  I soon found a superhero to fit my (then) off-beat personal taste for history and myth, this time "The Mighty Thor."

It wasn't until college, as a young married student, that I met up with comics once more. This time the forbidden fruit was found in the rooms of Boston friends, many of whom were early psychonauts. It was in such rooms, hung with black light posters and India print bedspreads, that I was introduced to Doctor Strange and the rest of the Marvel© World.  It was "Make Mine Marvel" from then on. 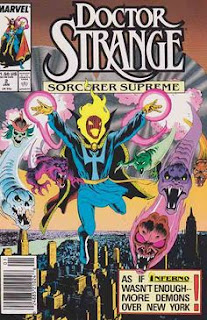 As does this one

I had kids young. My husband I used to read all kinds of things while seated on the floor or on the bed before lights out. As the little ones passed beyond the "Wild Things" and "When We Were Very Young," they were naturally attracted to the vivid panels of our stash of old comics. Cheap, bright, colorful, and full of drama, those old books found new readers. Eventually, every one, (which, if preserved in a plastic sleeve might be worth something 40 years later), was all read to rags. The coolest psychedelic drawings were silly-puttied to death.

The kids got older and so did their parents. Comics disappeared, only to return with Hollywood's decision to make lots of blockbuster teen/YA movies--a natural home for such stories of derring-do. For years, as CG progressed towards the astonishing flowering that marked Peter Jackson's Lord of the Rings, I've muttered, "Why don't they resurrect Doctor Strange? At last they've got the tech to really do him up proper."

Then came 2016 Dragon Con. I'd heard about the upcoming Doctor Strange movie with real excitement, especially as I'd heard about the talented cast. On the first day of Dragon Con, we were bumbling through the crowd, admiring the amazing costumes dreamed up by attendees of this yearly blow-out festival of cosplay. I had just been grousing "So, where's Doctor Strange?" when he walked through the door of the hotel. I rushed the guy, crying "Why, it's Doctor Strange, Master of the Mystic Arts and Wearer of the Eye of Agomoto! Can we get a picture???" 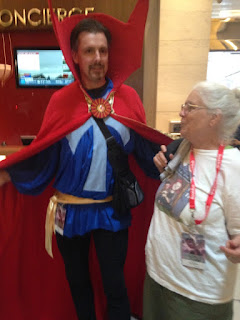 And there, bumped and blurry with excitement, we are! This was just the first of the excellent versions of Doctor Strange that I met over the next three days. They were all pretty great, all dressed in costumes that were copies of one or another of the character's long and varied sartorial existence. (Different artists favored different get-ups.)

Next, the movie came out. I went with a contemporary who uses a cane because she needs a knee operation. We two old girls helped each other to seats in the already darkened theater, then showing the first of 10,000 DC/Marvel trailers. We'd snuck in apple slices and water bottles and settled down, after a quick glance up at a bunch of teens hiding out in the back, wondering if they wondered about why the heck we were there. We hoped for the best.

Long story short, I really enjoyed the heck out of this movie. Although there was a little too much 21st Century snark, those classy actors gave their all to such dialogue as they were offered. The knock-out visuals accomplished the rest. Suddenly, I was back in that long-ago black light lit room.

Someone in authority, I believe, really studied the originals of those old graphics, the ones I remember so well, and they were sufficiently respectful to elder fans like us to make sure these vignettes were included. At the end, I was rewarded by a vision of the same sorcerer I remember so well, gazing from the window of his Greenwich Village Sanctum Sanctorum! 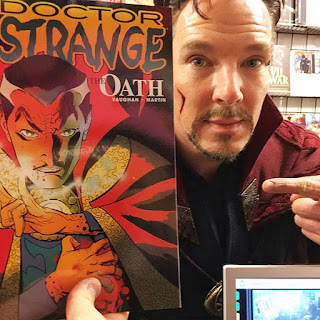 Some fantastically lucky fan took this at a NYC Comic book store...

And who could be more perfect for the character than Benedict Cumberbatch who has been giving us his BBC Sherlock Holmes with such panache--Star Trek villains, etc.? The few changes--such as making the Ancient One's gender ambiguous by casting the chameleon actress Tilda Swinton--or giving Chiwetel Ejiofor, as a strong Baron Mordo, a backstory, seemed an improvement, even to such a grumpy traditionalist as me.

I hope the residuals from some Marvel jobs will enable these talented actors to get some meatier, and far less lucrative, roles later on.

Some of these are fantasy historicals...

*As currently styled
Posted by Juliet Waldron at 5:26 PM 2 comments: