Vertigo & The Battle of Saratoga

The Schuylerville Monument commemorates the surrender of General Johnny Burgoyne to General Horatio Gates at Saratoga, a battle which was a turning point in the American Revolution. The British, who’d hoped to split the colonies in two with this invasion, started from Canada. The British gentlemen who took part were promised the lands of the American planters, Dutch descendants like Major General Philip Schuyler, who owned most of the upper Hudson and Northern New York. Gentlemanly Johnny Burgoyne set out with German noblemen and mercenaries in tow, anticipating a cake walk through ineffective Colonials, but what they got instead was a summer of guerilla warfare launched by Vermonters and the New York back country boys who’d been mobilized by Schuyler to destroy existing roads, fell trees, burn bridges, destroy crops, snipe, and generally mess up what seemed like a simple plan. The battle was fought near my family’s home place. They’d built a homestead in 1745 with Mohawk for neighbors, out in what was then the back of beyond.

Mother believed in pilgrimages to the old home place. She’d spent many summers on the farm with her grandparents, running barefoot, in periodic terror of an enormous rooster who patrolled the path to the outhouse. I went to a lot of battlefields and graveyards during my formative years, but one of the places I learned to dread was the Schuylerville Monument.

There are 184 cast iron steps inside this old stone tower leading to the top. Here, hardy souls are rewared with a commanding view of the beautiful upper Hudson countryside. Three bronzes figures decorate the crown: Horatio Gates, who politicked his way into commanding the Continental army for the actual battle, Philip Schuyler, who successfully prepared the ground for success and Daniel Morgan, whose riflemen played a large role in the victory. The fourth niche, for Benedict Arnold, who fought heroically at Saratoga and was seriously wounded, is empty.
The cast iron steps are why I still experience anxiety when I think of this place. Lovely, 19th Century, ornate--and to my vertiginous brain--filled with holes, holes through which I could see the descending spiral below me, through which I could see the bottom. I remember walking, then crawling on my hands and knees. Mother’s brown legs raced ahead. I sweated. I trembled. I sat down and laced my fingers through the holes. Despite the calls of “Come on! Hurry! Don’t be silly! Don’t be such a ’fraidy cat!” I began to back down, clinging to each stair. I can still see the flowery pattern, how worn and thin and frail the ironwork seemed. I imagined them bending, giving way, and then saw myself falling. I remember resting my forehead for a time against the cold metal, getting up the courage to keep backing down.

I was perversely pleased when I looked the monument up on the internet, and it said: “DO NOT attempt if you are acrophobic.” I guess I’m not the only one who has chickened out while attempting to get to the top of this venerable Victorian tower!
Posted by Juliet Waldron at 6:24 AM 1 comment: 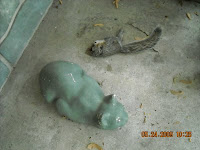 We have a bulkhead next to a small extension at the back of our house. Between bulkhead and laundry is about a foot and half of pavement. This has become the place where our local serial killer lays out his victims. I tend to let cats in and out at this back door, where I’m sort of tucked inside, facing the patio and a fence. This is often the first view of my yard I have in the morning, but I’ve learned not to look around the door at the area between the bulkhead and the house until well after I’ve had my coffee.
Our ex-stray cat has decided that this is the place to leave displays of his night’s work. Right now, fortunately, he’s apparently on hiatus, but earlier this spring when everything was young, tender, and frisking with joy, he was busy. The “work” that always impresses us most is the squirrels, full grown ones that he lugs in for us to admire. He used to eat them whole back when he was on the lam, but now just the head seems to be satisfactory. What’s the zombie joke? “Brainssssss!”
Anyway, he caught four squirrels this spring, great big plush grown-ups who should have known better. I don’t feel too sorry about them, because we’ve got a ton of squirrels who are up to no good with my bulbs and gardens. I do mourn the bunnies and chipmunks he catches, but what purely I hate, what I yell about, are the song birds.
Worst and most heinous of all his crimes, he ate my adorable jazz-master catbird in his fine, gray Wall Street suit. He crunched house finches around the bird feeder like potato chips, so that I gave up putting seeds into it. He brought me a darling Carolina Wren in his mouth, held so carefully that when I coaxed it away from him, the wren took flight straight from my hand. I hope very much that his/her rattling little bold scolding self survived the ordeal. This cat of mine could give Sylvester a bad name!
Web Site: Juliet Waldron
Posted by Juliet Waldron at 1:08 PM No comments: