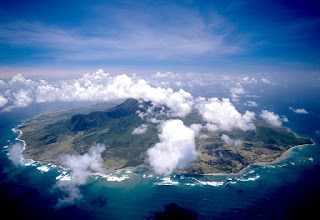 It is usually warm--between 82 and 70--so Accuweather says--at this time of year on Nevis. It is also cloudy, as the warm air gathers around the volcanic peak which forms a watchtower on this small  island -- 36 square miles. January 11th of 2016 is the anniversary of the date of Alexander Hamilton's birthday. Our present forecast is for a.m. showers and a light east wind, followed by a partly cloudy afternoon.  I remember the cloudiness from my own long-ago January visit to Nevis; it was no sunbather's paradise, like Barbados, Grenada or Antigua, some of the other islands I spent time on. The long ago Amerindian people called Nevis Oualie, "land of sweet waters," for the excellent fresh water springs.

I wonder if Alexander was born in the morning. Many babies arrive just before dawn, after a long night of labor for the mother. As far as we know, he would have been Rachel's third and last child; she bore only sons. As fair as Hamilton was, I imagine his newborn self as quite bald and pink. Maybe, because Rachel had already had experienced childbirth before, his was a blessedly quick arrival, perhaps only of a few hours. Her female house slaves, I imagine, would have been her companions, her solace through delivery.

Perhaps there was a midwife; we don't know. Childbirth was a dangerous passage in those days, but "calling the doctor" was not so obligatory as in the 20th Century. Rachel's husband James was probably not in the house; 18th Century men left that particular "trouble" to women. The Hamiltons were still living a modestly genteel life when Alexander came into the world. His "father's affairs" had not yet completely "gone to wreck" as he would, years later, write to a Scottish Uncle, William Hamilton.

Here's a snippet from A Master Passion, a vignette from the birth of Alex and Betsy's first child:


"...When she was under covers again, Mrs. Pieterse, with a great, gap-toothed grin, laid “the cause of all this trouble” in her arms, so she could see him. There he was, her first born son, with a tattered shock of black hair, perfect tiny fingers and toes.


“Another fine grandson for the General,” said the midwife. “Just as fine, if not finer, than Mrs. Carter’s. Aren’t you pleased, Colonel?”


Alexander had just come through the door and was even now looking over the midwife’s shoulder.


“I made a boy, just as you wanted.” Betsy spoke as Hamilton, his face shining, bent down to see.


“Of course you did,” said Mrs. Schuyler. “She has always been my most obedient child, Colonel.”


Formally, Alexander lifted his Betsy’s hand and kissed it. Then, unable to stop there, he leaned to press a kiss against her sweaty forehead..." 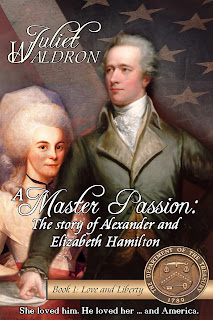 
And please do check out these Books We Love Writers:
http://triciamg.blogspot.com/