War-weary soldier Goran von Hagen returns for the first time in years to the alpine estate where he was born. Here, although he does not suspect it, a strange destiny awaits.

"So much more than the garden-variety shapeshifter v. vampire story, as the hero engages with the day-to-day realities of his post-transformation self..." 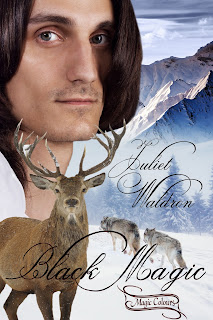 Black Magic ~ Amazon Countdown!
After an exchange of letters, Goran and Mina decided to make a summer journey to the neglected estate. This would be the best time to ride the place over and find out how things were in the fields and forests of their domain. Their younger siblings—all but Rupert—were still school boys, incapable of such duties.


It was not, as his father had always said, a good thing to leave houses and property in the hands of servants for any extended period. Even the best bailiff and staff could lose their way. Herr Stocke, who had managed the place for so long, had grown frail, and the Graf had concerns about relying so heavily upon a man who long ago should have been comfortably retired. At the time, Goran believed he could face anything with Veronique on his arm. Now, his twin, Mina, would have to help him stay strong, but she, her little daughter, Charlize, and his youngest sister, Birgit, had not yet finished their journey from Passau.


Being alone in the house was painful. As soon as he had finished a good splash in the basin, Goran abandoned the master bedroom. He’d often pictured Veronique there. She’d have teased him, no doubt, laughing mercilessly about the antique bed-curtains. They were embroidered with an erotic subject of nymphs and fauns--not at all to his, or to any modern--taste--but a work of art, nonetheless. They’d been purchased at great expense in pre-revolutionary France. Why his mother had never replaced these wicked bachelor relics he had never understood. Goran had heard stories that his father had been “a famous rake” before he’d settled down to become a dedicated family man.


Damn Veronique!
How often he’d imagined her here, standing before a mirror, letting down her heavy blonde hair. He’d have taken her in his arms, watched her lovely face flush with desire. They’d begin the prelude, as they had many times before, and this time—this time—it would happen, the fiery moment when she would allow him to enter her lush body!


Instead, he was here, on the mountain--alone.
Goran donned his knee-length riding coat. Habit caused him to check to be certain that his boot knives were snug in place. During the war, he’d learned never to trust to the safety of even the most familiar places.


He departed in a hurry, for the bedroom seemed full of ghosts, banging his boots on the stairs. From the sideboard in foyer he seized a dusty, half-full bottle of brandy. He thought he’d walk—and drink. The house was worse than he’d thought. A sensation of loss and grief pervaded the familiar rooms where he’d spent a happy childhood.


Not to mention the disorder in his bailiff's once tidy study!


Goran could only imagine the hours of mind-numbing book work which waited—and right now, he didn’t want to dwell on it. He stalked through the small, overgrown ornamental garden some grandparent or other had created. It was set in view of the long study windows, and had several slate paths, now narrowed by encroaching flowerbeds. The whole place was overlooked by a lichen-spotted marble faun atop a pedestal. Balanced upon one cloven foot, his head thrown back in abandon, the creature cheerfully played a flute. Goran paused to study it, remembering how it had frightened Mina when they’d been children. She’d complained she had nightmares in which it chased her... 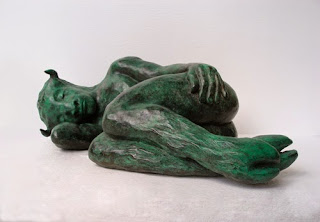 ~~Juliet Waldron
See All my Historicals at:
http://amzn.to/1UDoLAi
And, dear reader, if you've got a moment, hop on over to these other talented