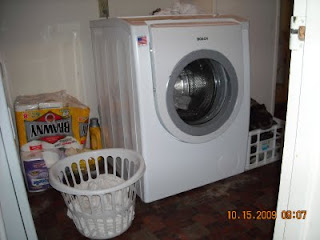 The big bucks ones! As a woman, who has been for long stretches of her life, a housewife, I don’t take appliances for granted. In fact, not too long ago, “housewife” was shorthand for drudge, and we pampered modern ladies forget this at our peril. Living in an area where I can still see Old Order Amish women slaving from morning till night—in between dropping babies and attending church—and as a writer of historical novels—I’m keenly aware of the comfortable life we modern women lead.

I’m not ashamed to love my appliances. I name them, too, because they are my “serving girls.” I feel lucky, rather like a Jane Austen heroine, to have married well enough to afford them. ;)

The washer came first, while we were still in college. As I had been lugging baby + clothes + diapers to the laundromat for over a year, this was a real luxury. I earned it, too, this trendy looking brown Sears appliance, while working as a waitress, picking up the quarter tips which were standard in the early 60’s diner, while my husband minded our son, Miles, and did his college homework. We’ve got pictures of me bringing in frozen diapers from the line during a harsh Massachusetts winter, though, and it was a good while before we managed to get the space and the dollars for a dryer.

I’ve just graduated to a front loader, a Bosch. Her name is “Ursula” because she has a bearish, blockish look. She is German by design, though the salesman carefully explained she was manufactured at a plant in Ohio. I love her dearly, because she is already saving us money on water and electricity. More than that, she does a ton of laundry at a time, and has a way with deep cleaning the ground in dirt that men are champions at producing in a way the top loader never did.

A dish washer only arrived at my home a few years ago, so the thrill of loading it up and then unloading clean dishes has not yet gone away. Her name, (christened by my husband) is “Heidi,” and she is also a Bosch, thrifty and extremely quiet. I was the dishwasher for years, and vividly remember many Thanksgivings and Christmases at which I spent literally hours at the kitchen sink, washing endless coffee cups, plates and silverware for our houseguests—my husband’s brothers and sisters. I dearly loved being the “Mom” and their lively company, but sometimes it got to be a bit much, and I’d have to go into the living room, turn down the rock’n’roll, and drum up some relief.

One beneficial side effect of not having a dishwasher for all those years was that both my sons were trained early to do dishes, dry them, and put them away. They were sent on to wives quite domesticated—at least, for boys!

You notice I haven’t said much about dryers. The fact is they aren’t very interesting. They are simple creatures and don’t develop personalities the way the other appliances do. However, I thank my stars to be a woman here in the 21st Century during winter or during weeks of rain like we had last summer, as I dump Ursula’s prodigious output into the gaping mouth of faithful, careful Molly the Maytag.
Posted by Juliet Waldron at 7:28 AM No comments: