How I Met Santa Claus 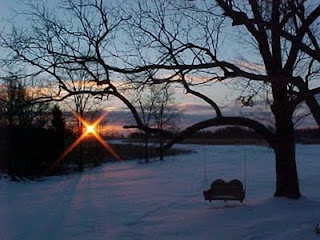 I was born at the end of the baby bust, so when I was little, for a time, before the Dad’s coming home from the war boom began, I was aware of being "special." Kids were admired, and my cousin and I were no exceptions. We lived in a pleasant Ohio town which boasted a fine liberal arts college, but which had also been home to our families since long before the Depression. My cousin's parents had a nice cape cod house just 4 blocks from where Mom and Dad and I lived. We were down by the creek, on Cemetery Street. My cousin's parents had a Cadillac, even if it was a hand-me-down one from my Uncle’s Mom and Dad, who bought a new car every two years. I mention this because they had the wherewithal and liked to “do things up right.” At Christmas, this meant engaging a Santa Claus who would visit their son--and me.

I suspected he just might be the real deal. For one thing, I was quite small the first time I saw him, not yet five.

The night before Christmas I was getting the whole “you better watch out, you better not cry,” treatment from my parents. There were canned peas for dinner, and I remember forcing the rubbery pills down, focusing on the Christmas cards hung on butcher’s twine beneath the cabinets so I wouldn’t gag.

In those days, children went to bed before their parents—-long before. Right after dinner, there was a story, a wash-up, and straight to bed. Tonight, however, in the middle of the story, I heard sleigh bells outside. My parents wondered aloud who that could be. I wanted to see, but was told to sit still. Daddy would open the door.

When he did, in came the most perfect Miracle on 34th Street kind of Santa. He was chubby and had a real long white beard, a round face, a clean red suit and shiny black patent leather belt and boots. He was even carrying a sack. My father was grinning in a way that usually meant I was being snookered, so after I croaked out a hello, I asked after his reindeer.

“Oh, Santa said, “they’re up on the roof—and you don’t have a chimney, so I knocked on the door.” Well, this seemed plausible, and from somewhere outside, I could hear sleigh bells, just every once in a while, as if the deer were tossing their heads.

Suspicion somewhat allayed, I watched him take the seat my mother offered. Next Dad picked me up and put me down on Santa’s knee. Santa was authentically cold all over, his clothes, his face, his beard, and he had a good vibe, smelling pleasantly, as older men often did in those days--of whiskey. This was a polite, low-key Santa. His “ho-ho-ho” delivered as if he meant it.

He asked me what I wanted most for Christmas, so I told him, about the “drink-wet” baby doll and the teddy bear I coveted. Outside the door, sleigh bells rang softly. It was pretty amazing, there in the light of our Christmas tree, with bright packages piled up underneath.

Then he said “Merry Christmas, Judy Lee,” and said he’d be back later. As he left, there was a blast of cold and the sound of departing bells. Again I wanted to peep out the window, but my Dad had picked me up again.
“So, J.L. What did you think of that?”

“Was that really Santa?”

Over his shoulder, I could see him trying not to smile.

Still, I was left to wonder because “Seeing is believing.” My Santa had been nice, jolly and bearded--convincing in many ways--even if I hadn’t seen him fly away. Being the kind of person I am, I really wanted to see his reindeer very much. After a little more thought, a doubt entered. It had been pretty clear that I wasn’t supposed to see him go.

My cousin was even younger than I, so about the most I learned from him was that he too had had a visit from “Santa,” and he too had heard the bells. I decided this cheerful visitor might or might not be Santa, but it wouldn’t hurt to act as if he was.