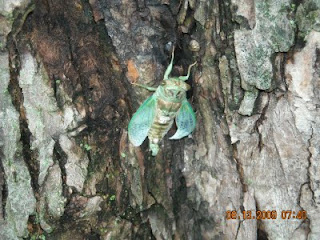 Bob was sitting on the picnic table the other morning, smiling and pleased with himself. He’d been out dancing in the moonlight, even though it was unusually chilly over night. I was sitting on the bench, patting him. He seemed entirely happy, kneading air with his paws and showing me his spotted belly, playing at being a Domesticated Animal.

The first cicadas are starting in our area, the genetic misfits who awaken on the far edge of their particular Bell Curve. They don’t sing much and flame out early. When one fell from a nearby maple, buzzing like a clockwork toy unwinding, Bob leapt from the table with a bound which would have done a cougar credit and made short work of it.

(It’s humbling, the way he can tune me out. Snap! Gone on cat business!)

I suppose he ate the poor confused thing, like he does everything else. Cicadas, with heads that are pure fat, are one of Mother Nature’s most sought-after crunchy snacks. Birds adore them. I’ve even seen squirrels eat them, these winged, green-armored Doritos of the insect world. I would think the wings and feet would make for an over-ridingly icky mouth feel, but not coming from an insect-eating culture, I’m not the one to judge.

I love cicadas. When I was small, some imaginative family member told me that their wings--see-through, gossamer, etched in green--were fairy wings. I guess what I really love is their deafening song, which can be as loud as 120 decibels up close. They are one of the few noisy things in which I take pleasure. It’s Nature, after all, like waves crashing on shore. The males on my trees start; the neighbor’s cicadas shout out an answer. With the trees arching green overhead, it’s my favorite sort of chorale.

Posted by Juliet Waldron at 1:18 PM No comments: “Pica” is defined as a “depraved or perverted appetite … for unnatural food, as chalk, clay, etc. common in chlorosis or pregnancy…”

My mother used the word in a way which stripped it mostly of those dire connotations, simply to describe cravings, like the classic chalk or pickle cravings of the old time malnourished pregnancy. I’ve often thought of the word when describing some of the odd foods my many felines have enjoyed over the years.

One of the oddest cravings I’ve ever seen in a cat were those of Sam, a.k.a. The Great Sammu, a large apple-headed Siamese who adopted us when we lived in Hendersonville, Tennessee. (The name “Sam” slowly morphed into “Sammu” because he was fat and sleek, like Nammu, the Whale). Sam had been living next door with his boy and his boy’s family. They had fallen on hard times, and had moved in temporarily with an aunt and uncle. A dog already lived there, and although this dog was a mellow character, Sammu’s nose was out of joint. He began to show up on our doorstep, rub on our legs and converse with us in his most elegant Siamese. He was a gorgeous seal point, with dark blue eyes, very intelligent, and skilled at getting his way. Finally, he spent so much time mooching at our house that his boy simply gave him to us.

Sammu lived happily with our family for about four years, until something happened to him, about 2 years after our move to PA. We never found out what. One day, while I was deathly ill with bronchitis, he just didn’t come home. Although I hobbled around the neighborhood coughing, searching alleys and garages, I never found his body. My dearest hope is that someone catnapped him; he was beautiful and personable.

At any rate, we learned from the boy next door that Sammu’s family had found him behind a Mexican restaurant in Arizona, where he was scrounging the dumpster for his supper. This must have been where he came by his pica, which was for “Mexican.” In the ‘80’s, making Nachos out of corn chips covered in bean and burger chili, layered with cheese, salsa, guacamole and sour cream was the latest thing. I soon learned I could never produce one of these meals without fixing a little plate for Sam. It was quite amazing to watch him eat, because he’d just start at the top and work his way straight through to the corn chips at the bottom. Cats aren’t really equipped for handling this kind of food, but he would sit there and chew away at the corn chips until he’d got most of them down. He seemed just as fond of the beans and guacamole as he was of the more predictable sour cream and hamburger. After he finished, he sat there, sides bulging, cleaning his face and long whiskers with one elegant, dark chocolate paw. We always wondered whether we should offer him a little dish of cerveza to go with it.
Posted by Juliet Waldron at 3:48 PM No comments: